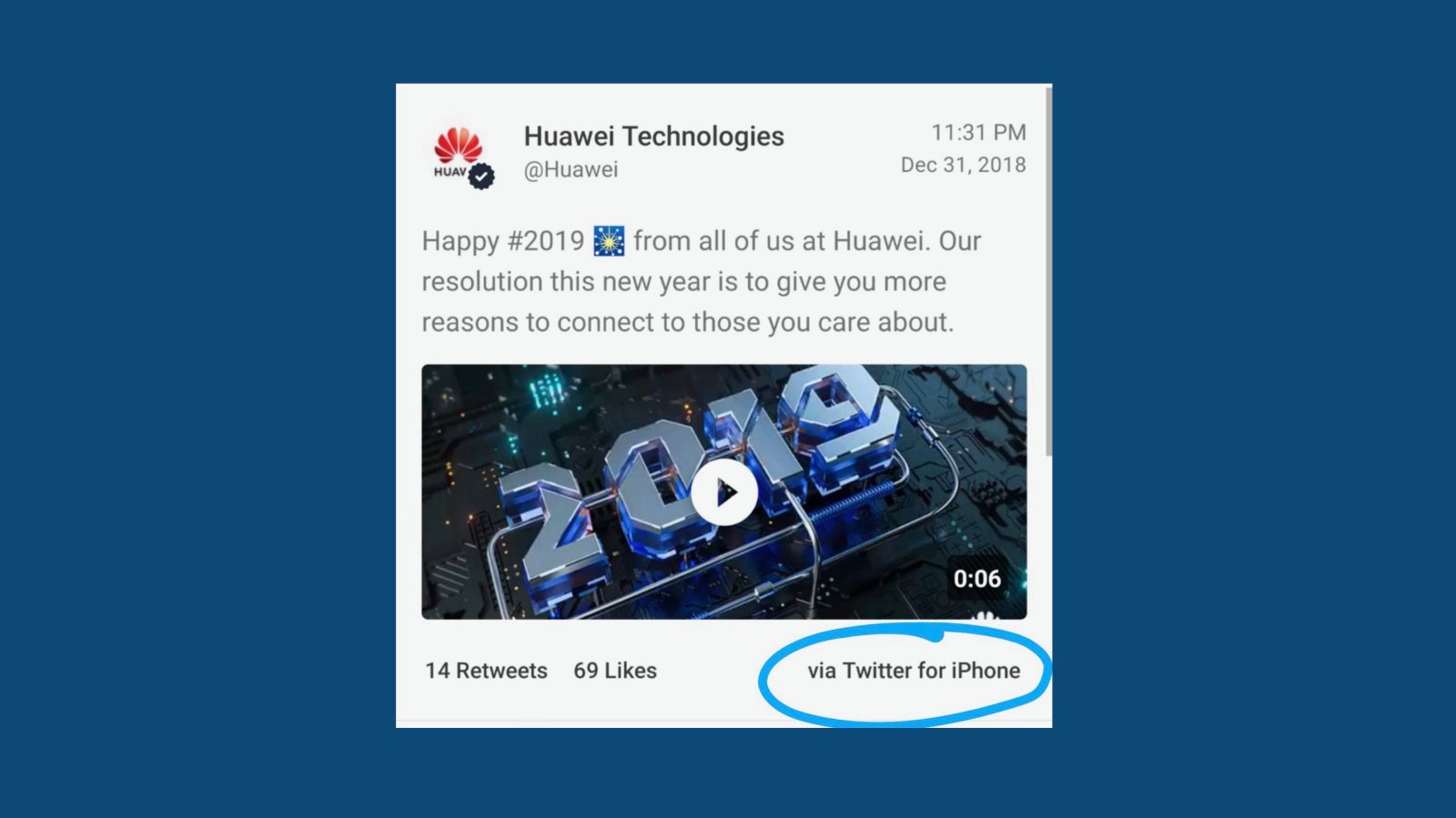 Huawei Employee Who Tweeted with iPhone Got Demoted

The celebration of the New Year has definitely gone awry for Huawei employees involved in the Twitter blunder that gone viral recently.

On the last day of 2018, Huawei Technologies’ official account wished all of its followers a Happy New Year on the social networking site, Twitter. But here’s an interesting twist: beyond the happy greeting, the eagle-eyed members of the Twitterverse spotted that the tweet was, in fact, sent from an iPhone — not a Huawei device — one of its biggest competitor. All thanks to the “Twitter for iPhone” signature that comes with all tweets sent from an Apple device.

The employees managing the social networking account of the Chinese smartphone manufacturer quickly sprang into action to do their damage control and deleted the blunder. However, they were apparently not fast enough. With the people on the Internet being their usual proactive selves, screenshots of the shameful tweet have been taken, shared, and have immediately gone viral.

‘Damage to the Huawei brand’

Unfortunately, the news of this Twitter mishap has reached the higher-ups of Huawei and the people involved had to be punished. According to the internal memo released on January 3, and seen by Reuters, Corporate Senior Vice-President, and Director of the Board, Chen Lifang, believes “the incident caused damage to the Huawei brand.”

Upon investigation, it was discovered that the outsourced company, Sapient, which handles the social media management and campaigns for Huawei used an iPhone when a desktop computer became unavailable due to technical issues. The executives at Huawei is convinced that the committed Twitter gaffe clearly “showed procedural incompliance and management oversight.”

Based on the memo from Huawei, the incident was caused when the social media managers from Sapient encountered a problem with their virtual private network or VPN while using a desktop computer.

In China, major social networking sites such as Twitter and Facebook, are blocked and censored. Many private citizens and corporations like Huawei, in this case, rely on a VPN to connect to iPhone. In addition, some reports say that there was a VPN outage in Mainland China during December 31. As a solution, the resourceful employees of Huawei used an iPhone with a roaming SIM card so they can send out the tweet in time to greet everyone on Twitter during the New Year’s Eve.

Most companies now use VPN to provide virtual connections routed from the business’ private network all the way to their employees or offices located remotely. VPN also guarantees a safe and secure connection that protects users from different forms of web traffic snooping and interference. Many corporations are investing in VPN connections to protect important and critically sensitive data.

While Twitter and Weibo users have found humor in the said incident, the officials at Huawei did not take it lightly and penalized the people involved. The two employees had to pay a costly price of their irresponsible actions.

In the same memo, Huawei management stated that they will be demoted by one rank lower and will have their monthly salary slashed off by 5,000 Yuan, which is more or less $728. One of the two employees involved in the Twitter blooper is said to be Huawei’s digital marketing director. His pay rank was put on hold for the year, which means he should not be expecting to receive any wage increase or incentive until 2019 is over.

Huawei has recently gained an edge over Apple as the world’s second-largest smartphone provider with its bestselling P-series devices in tight competition with iPhone’s series. However, this is not the first time the brand had gone viral on Twitter for all the wrong reasons.

Huawei definitely scored a hotshot brand ambassador when they signed with Hollywood actress, Gal Gadot, who is now iconically known for her role as the Wonder Woman. In 2018, Gadot was launched as a celebrity endorser in the United States of America for the Huawei Mate 10 Pro.

As part of the social media marketing campaign, a video advertisement featuring the beautiful actress talking about her love for her Huawei Mate 10 Pro and showing her using it. It was uploaded onto various social networking sites, including Twitter, where YouTube tech expert Marques Brownlee spotted that it was ironically tweeted using an iPhone as seen from the device’s signature. “Gal Gadot with the Huawei ad… tweeted from an iPhone. Niceeeee,” he tweeted. This was quickly picked up by Twitter users with 15.3K people talking about it and liking it 60.5K times.

“Some people have asked about my recent post with my new Huawei smartphone, and think I am using an iPhone,” Gadot said to CNET through her PR team in response to the issue. “That’s simply not the case. I love my Huawei P20 and Mate10Pro. They are lifelines wherever I am in the world. Sometimes I rely on help from my team to post larger videos,” Gadot said, “And that is what happened here,” she explained.

Clearly, this latest in a series of embarrassing Twitter blunders is the last thing Huawei needs this year after all the negative publicity that the Chinese brand has received. It will be recalled that the heads of at least six major U.S. intelligence agencies — including FBI, the CIA, the NSA, and the director of national intelligence — have warned Americans against using any device from Huawei and fellow smartphone brand from China, ZTE.

In his testimony to the Senate in February of 2018, FBI Director Chris Wray said they are “deeply concerned about the risks of allowing any company or entity that is beholden to foreign governments that don’t share our values to gain positions of power inside our telecommunications networks”. Wray also mentioned that Huawei has “the capacity to maliciously modify or steal information. And it provides the capacity to conduct undetected espionage.”

Carriers and retailers have since cut ties with Huawei and the brand has been struggling to re-establish their credibility as a reputable brand ever since.